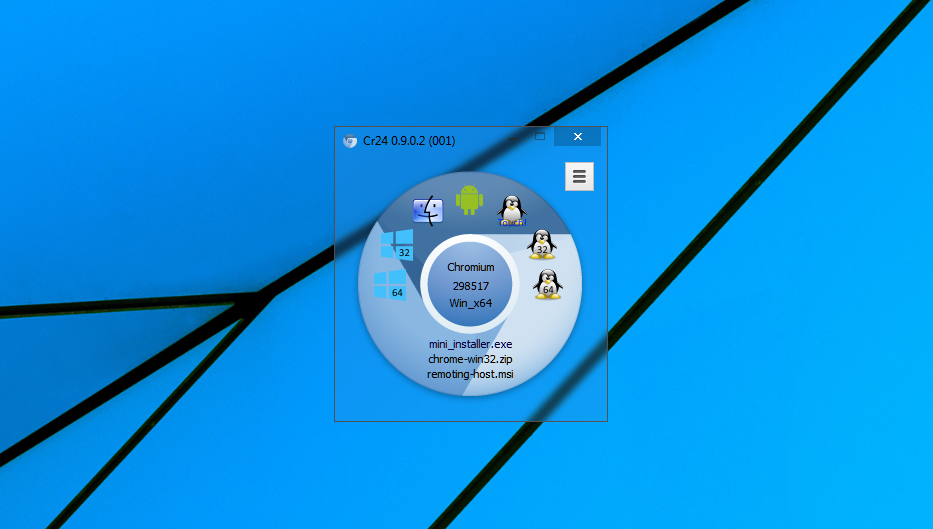 Cr24 is Chromium (technically, my Cr24 program downloads Chromium)… a free and open source web browser that is identical to Google Chrome with two exceptions: 1) there is no Google branding and 2) there is no automatic update system. It doesn’t call home (or the <insert acronym here>). While I like the pure part, the lack of updates bothers me. A lot.

Making matters worse… there are no easy methods of installing Chromium in Windows since the Chromium Project site is geared mainly at developers. You would have to know where to go to find the right download… or you would need to start learning code and/or making a build machine.

Cr24 (my application) aims to make this task simple.

Update October 7, 2014: Version 0.9.0.2 released. This version fixes nothing. Just kidding. THANK YOU to Rafael Maricca from LMD Innovative Online for telling me the SE (Special Edition, freeware) version of LMD has been discontinued. You can get the final version here if you need it (uh, act fast). As for 901, sorry folks, I didn’t get the memo. 902 has the final version of LMD on board (system tray icon). Oh, and hello Aero/Glass (settings, if you hate it). Pick your poison: Standalone executable / Windows installer.

Update October 5, 2014: Version 0.9.0.1 released. This version fixes one minor problem: the application would load on the desktop center instead of the screen center. This version will work nicer for people using multiple monitors. This is the first time Cr24 is being released as both a standalone executable (like the first release) and a Windows installer. Pick your poison: Standalone executable / Windows installer.

Optional files are Cr24.dat and Cr24.ini. I will explain these later but for now please don’t save these to the same folder as Cr24.exe unless you like experimenting. The INI file contains the settings for Cr24 which you can access via the main menu. The DAT file allows you to customize many things about the program, download links, what files to download, how they are named… etc. If you have a Cr24.dat in the same folder as the executable then it will override the settings I start with – and that’s fine – but if you see “Local” in the title bar please understand it is because the EXE sees you have a DAT file in the same folder.

Anyway, play with it and tell me what you think. Again I will post more here when I have time.