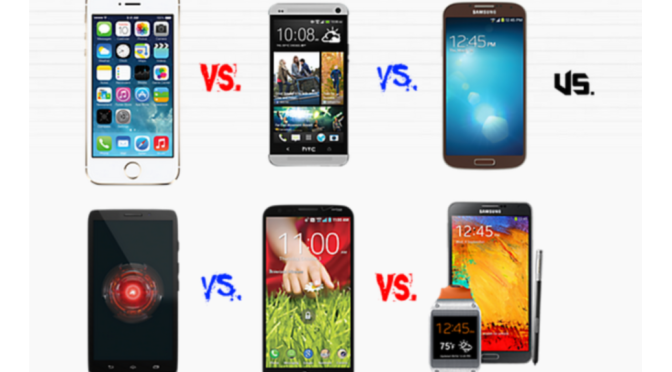 In order from smallest to largest display size (diagonal):

I am only comparing these six because they are some of the newest available or most recently announced devices that will be available for most carriers.

#1: For the Android purists out there, I forgot to mention the new Nexus 5 is also coming (announcement expected by mid-October, general availability most likely by mid-November or early December). Sadly (just like the Nexus 4) it is UNlikely this device will ever make it to Sprint or Verizon. LG Nexus 5 and Android 4.4 KitKat tipped for October 14th release date. Nexus 5 likely not coming to Verizon / Nexus 5.

Q: Wait, am I eligible for an upgrade?

A: Yeah, check with your carrier.

Q: Which device do you recommend?

A: To be 100% objective: it boils down to the user. Sticking to this fact (it boils down to the user) here are some additional (personal) opinions: Some users prefer Apple’s devices and iOS. If you fall into this category there is no argument: iPhone wins the day. Other people want the latest and greatest features (as far as I know, iPhone can’t do anything shown in this video) coupled with the complete ability to customize and personalize everything. If you fall into this category I recommend anything Android-based.

Q: Which device do you prefer?

A: I personally prefer Android-based devices, specifically anything running Android 4.2.1 or higher.

A: Don’t drink the Kool-Aid. It’s true, false and misleading – all at the same time. If you read Apple fanboy sites they will never admit Apple is losing ground. If you visit Android fanboy sites they will always say Android is winning. Everyone is spinning something. Some new surveys show 20% of new iPhones are going to former Android users… while I don’t know if this is accurate, I can only assume a large majority (almost unanimous) of the users were probably at the end of a 2 year contract and they were disgruntled with an older Android 2.3 device – which were all pretty horrible. Android 4.0 has been out for almost two years and just in the last year I have personally heard (from other people, not websites) at least a dozen or more stories about devout iPhone believers jumping ship… not only to Android, but specifically to Samsung Android phones because they saw what someone else could do with theirs and they wanted the same abilities. Android has 1.5 million new device activations per day. US Apple market share: 40.4% / US Android market share: 51.8% (as of July 2013). Global iPhone market share: 13.2% (down from 16.6% last year) / Global Android market share: 79.3% (up from 69.1% last year). I’m seeing similar percentages with our fleet of work phones (Android 56.3%/iPhone 18.8%). Feel free to do the research yourself, it’s all out there.

Q: I’ve read iOS is more secure than Android. This is true, right?

A: Of course it’s true. Well, except for the countless times the newest version of iOS was hacked on the first day of its release, just like the brand new iOS 7: iPhone personal data ‘hacked’ due to security glitch in Apple iOS 7 software / iOS 7 bug lets you call any number from a locked homescreen / iOS 7 bug enables user to bypass lockscreen, send emails and status updates / iPhone Hack: Researchers Find New Vulnerabilities In Apple iOS Devices.

Article: Experts Say iPhone 5S Fingerprint Security Feature Can Be Hacked — Got a piece of tape? Apple’s new authentication innovation could be cracked—and create a nightmare for users. Ask anyone who’s ever lived with a jealous boyfriend or girlfriend: If someone wants to get into your phone, they will find a way to get into your phone.

Q: If I decide to get an Apple-based phone, which do you recommend?

A: None. Just kidding. iPhone 5s (not 5c) – black, silver or gold. The silver and gold models have a white face from what I’ve seen so far.

Q: If I decide to get an Android-based phone, which do you recommend?

A: Right now I am really leaning toward the Samsung Galaxy Note 3 but it is a very large phone. My second (smaller) recommendation would be the Samsung Galaxy S4. The older Samsung Galaxy Note 2 does not work with Samsung Kies (10 months later Verizon has not fixed this problem) which makes it impossible to sync directly with Microsoft Outlook. It is not known yet if this will be working with the Note 3. This doesn’t affect me since I haven’t used Microsoft Outlook for over 3 years. All of my contact information is managed in Gmail and synced over-the-air to my devices.

A: The bottom line here is… it’s your phone, not mine.

Q: I don’t like any of these phones or I only like a few. Can I compare different phones?

A: Yes. I use The Verge (cellphones at The Verge) for quick comparisons of up to six devices. For each device you can click the little black icon with white arrows (at the top right or each device image/card) to add it to a comparison. Or you can modify an existing comparison URL… for example here is the same side-by-side comparison from above but I’ve swapped the BlackBerry Z10 (6814) for the Apple iPhone 5s (7328):

The trick is to make sure your carrier also carries the devices you are interested in.