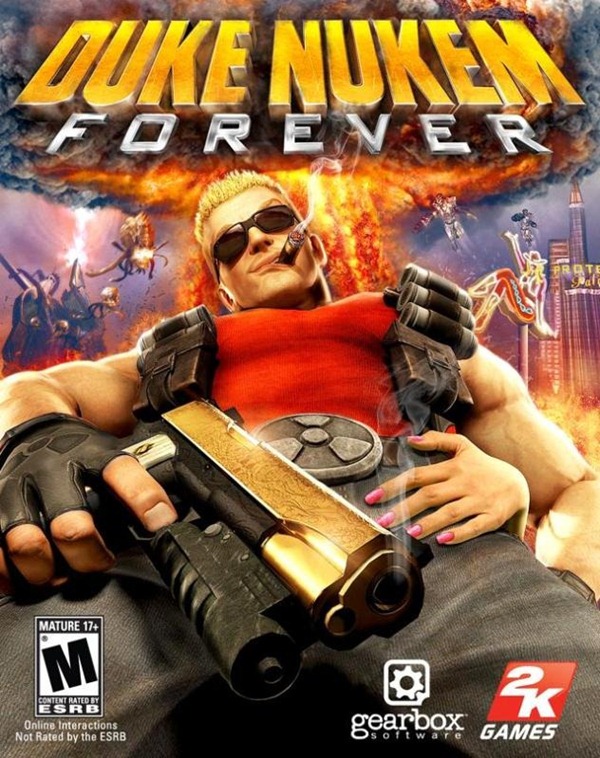 This is my mini-review of Duke Nukem Forever, specifically the single player campaign. Basically this post is just some of my random thoughts about the game overall. I bought the Balls Of Steel edition which included the early access DNF demo and offered extras that I don’t think other versions might have.

Possible spoiler warning: bail out now if you don’t want to know.

These comments focus solely on the single player campaign of Duke Nukem Forever simply because I still have not even tried multiplayer (I know, I suck). That alone is a little telling: when I originally played Duke Nukem 3D I was only interested in single player at first. I played it at least 3 times all the way through before I finally decided to give Doom multiplayer (at work) a rest and started to daisy chain more PCs and get them all running Duke Nukem 3D multiplayer. I was sold. That was all we played at work until the Quake demo landed and then Duke started to fade away. When 3D Realms closed its doors for good in late 2009 it looked like Duke Nukem Forever would never be released. It was around that time that I found Duke Nukem 3D: High Resolution Pack for Polymer 5.0 which got me back into Duke Nukem for a while (again, mostly single player). They did a great job breathing new life into the old project.

Anyway, on to the DNF stuff.

I beat the single player game this morning after roughly 9 or 10 hours of playing I guess. It was spread out over a week long stretch so I’m not sure exactly.

Note: most of my “cons” related to the changes in the game from Duke Nukem 3D to Duke Nukem Forever.

#1 – Too dark. This was hands down my worst experience with Duke Nukem Forever. Part of the problem is my older 21” CRT monitor which on full brightness is only capable of displaying semi dark area in one color: SOLID BLACK. Almost the entire game was so black that I was forced to use the stupid Duke vision goggles for over 90% of the game. This of course ruins the overall appearance of what otherwise might be a very nice looking game. Too effin’ dark.

#2 – Supposedly (according to the in game info screens) Duke can bench press over 600 pounds… but somehow he is just too weak to carry more than 2 weapons at any given time. That makes no sense to me at all. So, throughout the game it is a constant sacrifice: you have to drop one weapon to grab another which requires you to guess which weapons are best for an upcoming new area; and most of the time your guess is based on the sudden appearance of a new weapon but often you are still wrong. Many times you have to find out the hard way, die, then restart from the last checkpoint.

#4 – In Duke Nukem 3D it took less than 5 minutes to locate the first of many jetpacks. In DNF I never found one jetpack although I still attempted to fly anyway on several occasions.

#5 – Too many puzzles. I almost expected the final boss to be a Rubik’s cube. I don’t mind problem solving when it’s necessary but in some areas it was a little ridiculous.

#6 – Not enough chicks. Or titty bars for that matter.

#7 – The statues and Podgirls looked a hundred times hotter than the actual chicks.

#8 – Even though I know most of the weapons are probably fine-tuned for specific enemies, they should all work reasonably well with the lot of them, but they don’t seem to. In my opinion the freeze gun is a piece of shit placebo… it requires close range (not easy to do when things are exploding directly in your face) and you have to manually execute the frozen enemy with another button on the keyboard. Who has time for all that crap when you are surrounded by baddies?

#10 You can’t simply run over a weapon to pick it up. While you are having your ass handed to you you have to stop running, pause, hope you landed on the weapon and then until  the “E” shows up on screen, then hold in the E key for at least 1/2 second to actually pick it up. Wait. Dammit! You didn’t want to trade the ripper for the RPG! You meant to exchange it with the pistol. Hold in E again to pick up the ripper, switch over to the pistol, hold in E to trade it with the RPG. Dead. Loading last checkpoint, press space to continue. Stupid. See also: #2.

In the plus column, the things I liked were:

#1 – Ego. It beats having to run an infinite number of hundred yard dashes while being attacked just to pick up health packs… which was probably the one thing I hated the most about Duke Nukem 3D aside from the horribly skewed 2.5D Z movement (which was still better than Doom without any Z movement). With the new ego system I loved that I could simply find shelter, wait a few seconds to recover strength, and then get on with the killing.

#2 – "Red keycard? I don’t need no fuckin’ keycard." Although I was rarely ever annoyed with the blue/yellow/red keycards in Duke Nukem 3D (and even then it was only slightly) I prefer the newer problem solving methods they used in DNF instead. The keycards weren’t a bad system, it’s just that placing keycards somewhere on a map didn’t require much thought from the development aspect of the game and wasn’t thought provoking for the person playing the game either. The DNF problem solving approach is much nicer.

#3 – Dynamics/engine. DNF plays and moves somewhat realistic and does a good job of sucking you in. Obviously the graphics are not as high end as newer games like Crysis 2, but it’s got a decent and somewhat realistic feel and it looks pretty nice. I really like the game engine although I wish it was based on Unreal 3 instead of Unreal 2. Maybe Duke Nukem 5!

#4 – Interaction. You can optionally interact with the world in a lot of different ways and in some cases it adds to your ego… but I think the interaction that I liked best was with the enemies. The rampaging Pigcops and Preganators… anything that locked on to you would have to be manually destroyed, and the interaction with all of the bosses was just awesome. Up close and personal. I loved that.

#5 – Duke’s comments. Spoiler warning: Don’t read this one if you don’t want it to be spoiled. There were a few spots that had me laughing my ass off, literally. One in particular was when I reached the valves which was yet another puzzle. I let go of the mouse for a second and said out loud: “Fuck. I hate valve puzzles.” about a second later I grabbed the mouse and Duke said “I hate valve puzzles”. It totally cracked me up because I knew the developers had the same thought process or Duke would never have nailed what I said in real life. Kinda weird, but I giggled for about 5 minutes because I figured it was also a deliberate rip on Valve Corporation. Anyway, there are hundreds of random “just in time” Duke-izms to keep you LOLing. Another one that was funny (before I died 5 times in a row) was “Hmm, guess he won’t be in the sequel”. There are too many to count, but after this mini-review I’m off to find a DNF soundboard for my Android (if any exist).

#6 – Lastly, I still can’t believe they finally released Duke Nukem Forever, especially after 3D Realms shut down… once that happened I thought it was the death knell for DNF. I was shocked later when I started hearing that it was going to be released, but I guess what caught me off guard the most is that over the years all we have seen were artwork and terribly unfinished production work… the leaked screenshots and demos, etc… all of it looked almost like they had just gotten started on the project. I never thought it would ever be possible to reach a finished state. I was almost expecting to see "Under construction" or "To be continued…" signs and missing textures or something along the way, or a random bug or crash that would force me to reboot… something like: "we know, we know… we gotta’ fix that in the next patch"… but it was the exact opposite. The final product was beyond my expectations, it seemed very polished and complete (for the most part) and had a decent story line to go with it (although admittedly there is some terrible dialog in spots and cheesy acting/animations along the way). It was very stable and solid. I never found a bug and it never crashed. In fact, I physically became "stuck" in a wall by a guardrail only one time throughout the entire game… trust me I tried like hell to get stuck everywhere I could. I just expected it to be extremely clunky. Overall I am very surprised and pleased with the end result.

That’s all for now.

Hail to the King, baby!